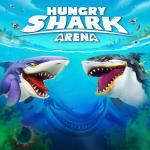 Hungry Shark Arena is one special arena from Gogy games that brings the battle between the sharks to life. Your job is to make sure that your shark can survive this battle royale game in which the vicious enemies will try to take you down at any second. Be quick and learn the basics of the game, including the multitasks for eating, growing, dodging attacks, and killing others. The best will be able to survive this vicious underwater war and claim the title of supremacy.

Help navigate through the water so that the shark can freely eat other fish so as to grow to be the biggest shark in this underwater adventure. Some prominent tasks in this game will be to hunt the smaller creatures such as the small fishes, the shrimp, octopus, and another is to be a predator and hit on others once your shark gets big enough.

Don't forget that this is a ruthless battle, therefore, use all the feeding possible to reach a specific size before starting attacking any other creatures. The shark of yours can also dash off the surface to jump out and capture other sea creatures that are out of reach as well. Get some friends and enjoy this awesome animation with addictive gameplay for free from https://gogy.games/.

Let's see if your shark can grow to become a Hunter, a Brawler, or a Charger! The tip is to unlock all the mighty sharks to get an upper hand in this battle. Beware of hidden enemies and their attacks so that your shark can go a long way in this online game with an underwater theme! We invite you to participate in more races with other games like Parkour Block 3D after you have conquered this one.