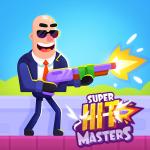 It all starts with a few simple tasks, yet you will train enough to become the best shooters in Super Hitmasters Online - the new shooting game from Gogy land for the fans of this genre! The game focuses on making your way up the ladder that is full of the toughest shooters. The only way to accomplish this is to shoot the targets that show up on the screen with one shot only. It's one of the most simple shooting game in which the players control one shooting button only.

However, despite the simple gameplay, it is quite hard to master the techniques and become the best. All players get the chance to learn the daily task of a spy whose job is to clear out all the given missions and targets. Sometimes, the targets will be hidden or blocked by other items or obstacles, which makes it harder to get a clear shot. Take your time and aim carefully before pulling the trigger to avoid scaring the targets away.

Luck is one special element in this game from http://gogy.games/, but your talent will be crucial to winning. The moment that you manage to kill the target, you get some stars to move onto the next levels. Get a total of 3 stars by succeeding with one shot! Keep in mind that there will be a limited number of bullets given per round, so use these wisely to avoid over-shooting yet failing to complete the mission.

Some kids have run out of bullets and ammo so they get eliminated from the game! Of course, if this is your cup of tea and you have mastered Super Hitmasters Online in no time, feel free to dive into a more advanced game like Apocalypse Truck.