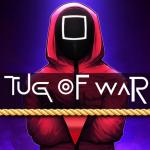 Players need to click the screen in the game Squid Game Tug Of War Game, you can invite your friends to a round tug of war. At the beginning of the game, players just keep clicking on the screen. They need to increase their strength by continuously clicking on the screen. The game adopts a variety of playing methods. Players can also PK online with friends. The duel of strength can be said to be a matter of a moment, we should go all out. It's important to keep your best strength, which will make your opponent unable to beat you at all. Try your best and survive to the end!

Not only this game, but you guys can also play together in many games such as Funny Food Duel at gogy games . They are also amazing. New adventures are always here waiting for you with something enjoyable and exciting. Check this out!