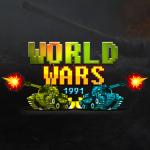 World Wars 1991 brings back the old type of vehicles and weapons such as the tanks, aircraft and more in this Gogy fighting game with the specialized simulation characteristics. The players start by breaking down the wall of the maze to search for not only the way out but also the enemies. Only by dodging the bullets, hide among the walls and kill all enemies will you be able to conquer this battle. Once the paths are open up, choose the right place to hide and avoid open-spaces where the guards can spot you.

Don't be hasty or else the crowded enemies will take you down with their firepower immediately. Speed will also be one of the key points to win this game. Go too slow and you become an easy shooting target. Update the weapons using the gained scores from time to time as this is a good way to stay on top with the strong firepower. Pay attention to the arrangement of the bases to figure out where to attack first!

Engage in more intense battles where the best of your fighting skills get to show off like Big Game Hunting and Save The Coal Miner. Keep the enemies under your radar and be wise when making an attacking decision due to the limited resources. At http://gogy.games/, a great commander will shine!