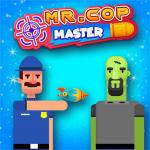 The world in Mr.Cop Master needs a hero to save innocent citizens from the destruction of plenty of evil forces. From spies, agents, zombies to aliens, all of these can be swept out by the one and only cop master, who is controlled by you! Let's start on this secret mission and use the shooting ability to wipe out the screen with the bad guys. It's a simple shooting game of Gogy fun games in which you will be given your designated targets at the beginning of each stage.

Once you are ready and used to the control keys, start targeting those creatures, and shoot them off. The weapon that you will use is your gun that comes with an aiming scope that allows you to estimate not only the distance but also the direction of the targets. Before it's too late, you need to stop the evil creatures from taking over the world by shooting them one by one. For each successful shot, gain yourself some scores which help purchase updates and more from the store at... More epic missions will be unlocked as you progress to higher levels with enough score range.

Takedown the enemies with your shooting skills and aiming technique, whether it's the moving targets, the ricochet, bouncy ones, or simply perform your shot in a straight line! The force of your bullets alone can be enough to make the items and characters explode or fall, so use this power wisely. Be creative and come up with a shooting path that will kick off a chain reaction to defeat more than 2 enemies at once.

At http://gogy.games/, you can train and practice the art of shooting enemies with more shooting games like The Builder Halloween Castle without any cost!