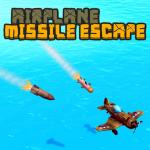 Airplane Missile Escape takes the players of Gogy land on a new ride to explore the battle among the most astonishing planes while tackling the other aircraft. As the main target of the missiles, your plane is being chased and targeted by tons of missiles. Make sure that you can control your plane in this plane war and escape the attack of them all without any failure!

There is a limited number of chances available for the players of the game to endure the attack wave of incoming missiles. Once the number of lives run out, your journey shall be over and scores are collected. As you participate in this game, fly over the blue sea and slip towards different direction to avoid the missiles. At first, you can keep track of the missiles using the parameter and radar.

However, once you have progresses to higher stages in the game, it takes great reflexes to detect the unexpected attack of the missiles. The controlling of the plane is easy for kids to learn and master, which makes this game a perfect option for kids of all ages. Keep in mind that you can either sidestep and avoid collision with the planes, or use your specific tactics to make two missiles hit and explode.

For more games with the same theme of flying a new plane, check out the list of free games at https://gogy.games/ and pick the one that suits you most! The game will train and enhance your reflex when it comes to such an intense battlefield on air with the top-tier graphics and animation. Are you ready to start rocking the air battlefield with your amazing tumbling and drifting? Come to check out more games like Poppy Dungeons to demonstrate some of your best moves while maneuvering the planes!

Use the arrows to drive the planes.