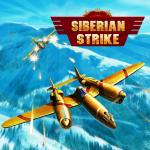 Take your plane controlling and shooting skills to another level with this Gogy new game of Siberian Strike with one of the best animations in retro-style! Enjoy this relaxing and competitive aerial combat game to challenge yourself in combat against the huge bosses in massive aircraft. Their army and team of aircraft are expecting to hit your base with the goal to take over the sky.

Do your best to win this combat and conquer their territories in return. Since it's one of the games from the collection of shooting games, do prepare for the increasing numbers of enemies, difficult shooting range, and more obstacles. Don't collide or come into contact with the other aircraft or else you will lose. Shoot precisely so that they will return and fail to penetrate your air base.

Thanks to the exciting 2D animation, lots of action, colorful graphics, exciting combat, and the best upgrades to increase your plane's capacity, it's the perfect game for testing your skills and getting tons of fun during your free time at https://gogy.games/! Estimating the distance and the line in which your enemies will show up is crucial to adjust your plane's shooting line. If you let one of the enemies' plane moves through the border, the game will be over immediately.

Keep exceeding your records and gather more and more scores to claim the top title on the Leaderboard here! Other similar-themed games with eye-catching graphics such as Color Galaxy or Stickman Parkour Skyland will be suitable options to add to your favorite basket as well! Dodge the bullets from your enemies carefully to avoid any damage and gain enough power to defeat the bosses at the end of each stage.

Hold and drag the mouse or touchpad to maneuver the plane.