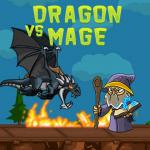 If you are a hardcore fan of running object games, Dragon Vs Mage new game will be one of the coolest options for this summer. In this Gogy kid game, the dragon is chasing after the mage and the battle is getting more and more intense. As the dragon uses its minions to attack from the front, the mage is in a bad situation and needs your help to survive the arranged attack waves!

Your job in this running game is to avoid the small corners, kill the minions using the power of the mage while jumping at the right timing. Why would you need to jump as well? It's for collecting the golden coins, which are calculated as precious points and the floating hearts that will add extra chances for you on the journey. The hearts will show up randomly and it will not stay in one place so easily. You will have to chase it as well. Don't let the blood bar run out because that's when your chance ends.

In case you are attacked by the fire, the monsters, or the new dangers, your blood will decrease significantly, therefore, move constantly to steer clear of those threats. The mage that can cast the spell at the best timing shall defeat the most monsters and gain the upper hand of this battle at http://gogy.games/. But first, learn how to control your mage and which button is for casting the spell as well as for jumping.

Would you like to see the Leaderboard that is filled with the top scores of the advanced players? Don't forget that there is always room for improvement, especially with your skills at games like Castel Runner and Shoot To Military Vehicles

Use the mouse to choose functions, X key to use the spell, and up arrow key to jump.