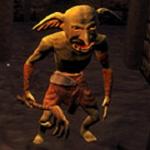 Your village has been ravaged by goblins in this new game from Gogy land. It's your job to control a hero in order to save the villager and eliminate the goblin threat. In the game, you encounter different types of goblins on your journey, some are easy to kill while others pose greater threats and difficulties. But after a few trials, you will grasp the basic rules and master the game in no time!

At the beginning of the game, each player will start off from a large dungeon which has dark graphics and various scary monsters. Start moving immediately since if you keep standing, you will become an easy target for the goblins. The goblins are the enemies of yours in http://gogy.games/ and they come in herds to attack. You will have to utilize all of your weapons ranging from gun, stick, machine gun to bombs and ammo to blow them up.

Don't let they hit you for too many times as it will result in a failed attempt. Also, pay attention to the energy bar. You need to know how much energy you have left to come up with a smart strategy. In case there are too many goblins attacking at the same time, use the bomb to free yourself. However, it's all about the reflex and attacking ability in this action game. The game has an amazing design with realistic characters to optimize your experience. Don't hesitate to try out some other action games such as Crime City 3D 2 and Wasteland Siege in your free time.

Move the character with WASD or arrow keys, Aim and shoot by dragging and clicking the left mouse.