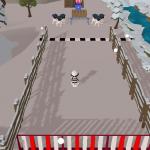 The cops are on your tails and they will get to your place in no time! After you pulled a heist on the bank, you have become the target as well as the shooting bar for all policemen in the city. It's time to flee and run away from them using all of the vehicles, resources, and boosters that you have! The game is another running game with similar gameplay as those of the famous Subway surfer and its sequel.

In this new version from Gogy running games, you will play the role of a robber who is running away on the zig-zag running line to get away from the chase of the police forces. However, this new version of gaming selection does have a finish line as the final goal for the players instead of being an endless game. Switch from one lane to another when it's right and pick the perfect chance to jump, dodge, flip, and gather the icons that you find on the way.

Those will be your boosters and bonuses to increase your running speed and increase more capacity for your character. A magnetic icon helps to suck all the coins to your bag, while a shoe icon will boost your speed significantly. Don't hesitate to use them when it's the right timing because they will allow you to gain higher results, escaping faster and easier in this intense chase. Such a running game will train your virtual management of movement and speed increasing skills.

At http://gogy.games/, our daily collection is filled with new and fresh choices for the summer, such as Popcorn Box and Ducky Duckie. The choice is yours so fill your favorite basket with these free games immediately!

Use W, A, S, D to switch lanes, jump and dodge, Click the left mouse button to interact.