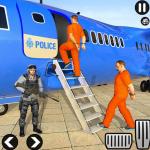 One of the most dangerous and high-risk tasks that the police officers have to carry out in the US Police Prisoner Transport free game at Gogy land is the task of transporting those high-profile prisoners from one cell to another location. Thanks to the high-security system and the complicated criminal transport system, unfortunately, some terrorists have attacked prisoner cells and they are attempting to break the criminals out. They need you as the transporter to make the mission become successful.

Will you take over the wheel and drive through all the security blockage, the cameras, and other obstacles in this game? It's a fact that criminal truck simulation is not the best option for transporting those dangerous prisoners. You need to control the movement of the truck, drive it around the area using the guided map in order to search for a new cell or an escape path.

Keep an eye out for the prisoners roaming outside the cells, they can become your allies as well. The car will show some statistics of fuel, speed, and direction on the game screen, therefore, you need to keep them in check to control the overall progress of this jail-breaking mission.

At http://gogy.games/, after you finish and succeed in one task, some golden coins shall be given to your scoreboard as rewards. How many prisoners can you bring out of this game? Take up the other challenges that are more difficult to conquer such as Alien Slide and LA Rex for the entertainment time!

Use WASD to drive the truck, interact using the mouse.