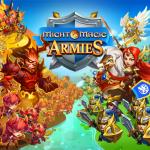 Only the top commander can lead the mightiest army to dominate all the land in Might And Magic Armies while tackling the other opponents' territories and crushing them all! Not only will your commanding skills be put to test with a large scale army in this Gogy fighting game but you can also practice to understand how the setting of a battle works. Use the different soldiers wisely with a terrain strategy to roam the place efficiently.

You will need to start summoning the epic heroes and learn each type's unique skills, advantage, blindspot, and so on while choosing the army for each battle. The work of recruiting thousands of soldiers will be the key value to exercise and ace in this game of fighting themes. The better you choose, the faster you can win over the dangerous opponent.

Let's start leading the army filled with ferocious creatures from the our Gogy land and defeat the others with brute force! If an army can fit into the jungle circles, you can hide from the others using the disguise in the forest. Also, keep in mind that you can speed boost and use that feature to help to utilize your army power, so use them wisely at the best timing!

Accelerating in time will help to upgrade the damage range and the speed of the army overall, which results in better manangement of the team. Can you activate all the boosters and take advantage of the upgrades to get the best team working for your side? Let's tackle more battles and matches in the other fighting games such as Bumper Ball io from our daily replenished collection at https://gogy.games/ for free!

Use the arrow keys to move, spacebar to activate the speed boost. Use touchpad on mobile and on-screen buttons.