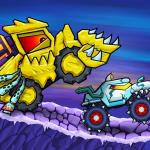 Car Eats Car: Arctic Adventure is a fun fight between high-function cars which are competing to destroy opponents' gifts! In order to conquer this Gogy game's highest rank, you will race and fight against the attack of your rivals. As you are the main driver of the truck rolling on the highway with plenty of gifts, you need to keep it safe and overtake your enemies. First, create the model of the car that you like by customizing the available items from the incubator.

Use your highspeed and great dodging skills to reach the destination where you can release your other car friend. On your path, there will be a rain of bullets from the attackers, as well as close-range shots. It's a perfect Gogy car game to demonstrate your good driving skills, careful control, and turbo acceleration, all of which might come in handy in this crazy driving chasing game.

Cops and bad guys are both behind your car, so dash at the highest pace to escape! The only way to keep advancing through plenty of challenges is to constantly upgrade your given list of cars. The size of monster cars will bring you some advantages, so utilize them to fight off the bosses from these final crazy rounds.

Don't forget to take advantage of the bombs, turbo, nitrogen boost, and other given parts of the car to dominate the races quicker while keeping your car's balance. Explore more games from the world of car games such as Foxy Land or The Smurfs Cooking. Plenty of diverse genres and a wide variety of game themes are also free in case you want to go for a change!

Use the spacebar to release the bombs,

the X key for turbo,

W for gas, S to use the handbrake,