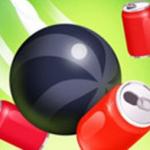 Rope Slash seems to be bowling but it’s not. The way to make the pins fall is different. Here at Gogy addition games, instead of rolling a ball toward pins, you will cut the rope to release the ball and make it fall into the cans and smash them. This is actually a puzzle game that requires you to find the best way to smash the cans.

Make all the cans fall and you can unlock the next level. Even if there is the only one that can stand still, you fail and you have to play that level once again. In the beginning, everything seems to be easy and simple. You are easy to make the cans fall but as you level up, it becomes much harder. You don’t have to smash only one group of scans but more than one besides the puzzle becomes trickier.

On http://gogy.games/, timing is essential. The moment you take action decides determines largely a success. The ball will move like a pendulum and it does not always do that. After a certain amount of time, it will stop and when it does, you can hardly use the ball to spill the cans. If the ball is suspended by a string, cut the string as soon as the ball is in motion. If the ball is suspended by 2 or more strings, you need to choose which string to cut first.

This is the key point. Then, keep it in your mind. Don’t give up, even you fail many times on a certain level. Play several times and you will figure out the best solution. Have fun and don’t forget to explore other choices such as Blocks Sliding Tetriz and Rolling Domino Smash.

Use your left mouse to cut the rope.