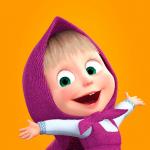 Masha And The Bear: Meadows

While taking the walk into the forest, Masha and her bear want to take some rest in a peaceful meadow. To do that, they need a friend to pick out a clearing for themselves in this Gogy online game so that they can rest on a big, beautiful, and relaxing ground. However, there will be other players looking for the same thing. You need to control the main character and get a hold of the biggest chunk of terrain.

Let's show them whose clearing is the biggest of them all! You might get your territory expanded by moving in a circular motion. Any area that is enclosed by your trail will be added to your existed territory. However, don't let anyone step on your trail, or else your turn will be over as they can take over it. Keep in mind that every time you see another player getting closer to your edge of the territory, make sure to clear out and gather more spaces.'

On the other hand, you can do the same thing and step on the other player's trail to make it yours. By doing this, you can gain more and more territory and eliminate most of your opponents in this Gogy interactive game of real-time. Feel free to use the gained coins in the store to unlock your favorite cartoon characters.

This game is available for both PC and mobiles. Simply move the mouse or the finger while pointing to the direction that you want the character to run to. It's a fun and explorable land with a lot of new online friends having fun alongside you! Don't miss out on the new updates of other cool games like Candy Revolution from our website at https://gogy.games/ as well!

Click or use the keyboard to move the character.