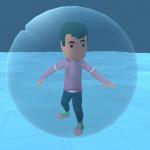 Depending on your opponents, you can decide whether you can hit or you should run. Being flexible will be the key to winning this Gogy new game of Zorb Battle as you will need to control your character amidst the chaotic battle in which all players are moving around in a small bubble of their own. There will be lots of opponents on the field at the same time, all with the purpose of pushing the rest off the mat. Can you spot the layout of the board in this first trial game?

Your job is to roam around this round-shaped mat and steer clear of the area that is marked red. These will be the dead zones as they are close by the edge of the board. If you move too close to those areas, chances are the other opponents can hit you off easily. Face the opponent of your choice in case they are smaller than you so that you can push their bubbles off the mat! However, if they are bigger, older, and stronger, it's best to avoid and run away as fast as possible to keep your character safe in this survival mode game!

Also, while you move along the board, pay attention to the scattered growth balls which can be collected and used as payment to grow. These power balls are to help you get stronger, with stronger frames for your bubbles that will bring down the others. Don't forget to carefully control the character movements as one wrong move can get you to the edge and fall out of the board.

How many opponents will you be able to take down and push into the water before the time runs out or before you get hit? Keep the record and show it off on the Leaderboard at  http://gogy.games/ with tons of other games like Food Roll!

Move using the mouse cursor or the arrow keys.