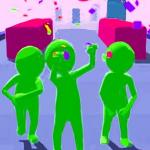 Play and relax more so that you can have relaxing moments after intense battles. With a new genre of the ultimate entertaining game just released Join & Clash at juegos gogy. Rest assured that you can fully enjoy the game without having to worry about paying any amount. Starting on this race you will need to control your character to run on an extremely difficult road.

In front of you are the pitfalls that are in the middle of the road. They appear very crowded and dense. How do you get over it all? Use all of your wits in the game. Don't touch them because these are deadly traps and you will have to stop playing immediately. Rest assured that the game does not require time. You don't have to worry too much. Perform a race with the character. Fight all evil opponents that have appeared in front of you.

There are many challenges but don't be afraid. You are one of the bravest heroes in this fight. Please save your princess and complete each game quest. Collect the golden keys to be able to complete each level as quickly as possible. Rescue princess destroys all the trouble of pink opponents that are intending to kill you. Each time you overcome those opponents you can win the mission that the game Join & Clash at http://gogy.games/ offers.

Why don't you recommend the game to those of your friends? With your friends join now on the game to get together to have the most entertaining moment. Allow yourself to participate in a few other similar games Boho Animals Jigsaw and Cartoon Autumn Puzzle

Use mouse to control the battle.