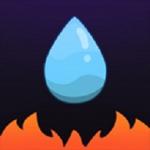 It's the battle between fire and water in Water Rush, the new game for both boys and girls in Gogy online games. It's more than just an ordinary arcade game. Instead, it is a combination of an interesting physics game and a puzzle game as well. The situation is on fire! Your house has caught on fire and it's burning fiercely. To stop the damage from spreading like wildfire, in this case, you will have to take advantage of the little resources of water to save your house.

By removing the dirt and the excess soil surrounding the water source, you will be able to guide the waterline down to the burning place. It takes some serious physics knowledge to choose the right position to dig the land, move the soil so as to let the water trickle to your house. The fire will get increasingly bigger depending on the difficulty levels, therefore, upgrade your skills by overcoming the small and easy tasks before heading to the harder stages.

Keep in mind that we only provide you with a limited amount of water in this game at http://gogy.games/. If you fail to stop the fire using that amount, or if you run out of the water, you will not be able to progress to the next level. Keep up with tons of daily games for kids such as Bottle Tap and Popcorn Burst 3D

Click the mouse or tap on the mobile screen to remove the soil.