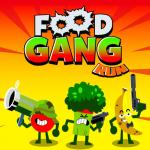 Control the pace, movement, direction of the Food Gang Run and help them escape the police in this endless runner game from Gogy new game list, filled with fast-paced features and thrilling challenges. Obstacles are certain and they are here to stop the fruits on their path to run away from the police. Help this groups of tomato, broccoli, and banana hit the running platform.

Escaping the flying police donuts at all costs and surviving the danger of this kitchen will not be an easy feat, however, with a decent practice, there's nothing the players can conquer in this arcade game. Once you start a stage, the fruit characters will start moving away from the starting point of the platform. As they progress through the routes, more chacracters from the police side will start to show up.

Meet the flying police donuts, pizza policeman holding shooting guns, pumpkins shooting at you, and plenty others to come. Since the attacks come at the same time, dodge the bullets, run as fast as possible, and change the lanes constantly to avoid obstacles. The tactics of each opponent are different, so adapt to stay alive and steer clear of the bigger opponents that can get you killed. Limited lives and energy is another problem that you should keep an eye on.

Use the clock and energy meter on the panel to keep track of the remaining energy for the next few minutes. Will you be able to take advantage of all available weapons ranging from the Revolver, Shotgun, Rifle, Sniper, to explosives? Upgrade the elements of shooting range, damage range, ammo count to increase your shooting radius. Boost to go further with other shooting games such as Red vs Dead from https://gogy.games/ too!