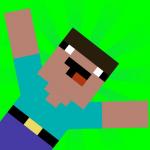 Explore the exciting storyline of this Noob friend trying to escape the zombie apocalypse in the Gogy 2022 free game: Noob vs Pro Zombi Apocalypse! The goal is to try and get the car to the destination - which is the evacuation point on each level so that Noob can escape the zombies. You need to slowly go through all levels, one after another. The goal of this driving game is to help the Noob and the Nubik survive the challenging zombie mod, but there will be plenty of room for exploration.

There are tons of adventures waiting for the kids in this game as you will try to advance from the starting point which is his small house in the forest. You need to drive the cars quickly to avoid the sudden attack of the hordes of zombies. They would want to destroy everything showing up in their path, therefore, help our main characters kill the zombies as well as escape safely.

Besides moving the cars, you can also control the shooting force of the character to eliminate the zombies. If they reach too close, make sure to shoot precisely to keep the game going. There are a few elements that you need to take into consideration to control the movement of the car, which are the Fuel, Engine, Turbine, and Wheel.

Let's try to move the car first and start learning to take over the elements in order to control it more efficiently later. There will be a setting for an auto movement that you can utilize to make the most out of each car moving. Learning the basics is simple, but mastering it will be quite a challenge for this game at https://gogy.games/ and for other games like Minewar Soldiers Vs Zombies!

Use the spacebar to shoot at the zombies, and arrow keys to move the car.