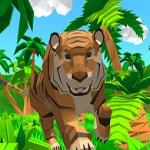 The dark and dangerous forest of Tiger Simulator D awaits for the most powerful and brave tigers to join in and take control of the animal kingdom at Gogy online! Your job is to build a kingdom using the control of your tiger. Starting with roaming around to get used to the map, the scenery, and other common objects, you will proceed through the game with the ultimate goal of hunting down the other moving animals.

The more small animals you manage to defeat, the stronger your tiger will become. Keep in mind that only by gathering more food from attacking the targets can your tiger survive in the wilderness alone. Besides small animals, beware of bigger species that are looking forward to a chance to eat you as well. The fun part is to fun another tiger and create a family of tigers! Don't worry you'll be able to defeat them now!

Showcase your set of skills that are necessary to become the last to survive this battle at http://gogy.games/. These fierce tigers still have some weaknesses of theirs that you can exploit to find a faster way to defeat the enemies. Avoid being scratched, hit or hurt at all costs! Prepare to dive in the world of thousands of 3D games such as Brave Triangle and Falling Down, all of which are for free!

Move and control the tiger's direction using the mouse cursor.