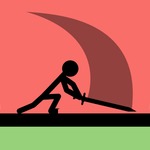 The third episode of the popular gogy games Make Them Jump is now available! It's called Make Them Fight. Make all the dudes use their swords to destroy the shurikens flying across the screen.

In a small village of gogy, there are many stick ninjas living here. They need to practice abilities day by day. It also needs your help that use your reflex skill to control them. Keep them being alive as long as possible. You can play with all your fingers to control up to 5 dudes by your own, or just ask for some help to your friends!

There are a group of ninjas live a peace village, they have to practice their ability every day. They have trained their jump ability and fall ability called make them jump and make them fall, this time is to fight skill called make them fight. Now help them chop down as many darts as you can. Create a high score and show it to your friends.

Visit our website to play similar games or other great action games as Roly-poly Cannon: Bloody Monsters Pack and Superfighters! Have a good time http://gogy.games!

Use mouse or tap on-screen to play.