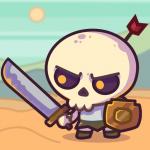 The threat has returned to the kingdom! The Dark Lord's army has appeared on the borders, indicating that the war will be truly total! During exciting battles, the new free castle game Raid Heroes: Total War will provide unforgettable emotions. You can play as a real landlord or army commander and demonstrate your tactical abilities. This is an incredible blend of rpg, strategy, and idle gameplay.

This is a fantastic combination of rpg, strategy, idle heroes, and auto battle games! Instead of reading about hero war legends, become a part of them! This is a game you want to play! Best of luck in your battles!

We are constantly updating new games for players around the world. Get ready for your exciting journey now. You also have the opportunity to participate in other similar games such as Super Oliver World at gogy games. Please use different moves and win this game.

Use the mouse or touch.