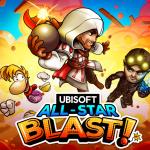 Are you ready to tackle this cross-over of a game called Ubisoft All Star Blast! from the list of Gogy 2022 games online? Not only is it a real-time multiplayer game that allows kids of all ages to participate but it's also a remake of the classic genre of bombing games. You can compete in this energetic game of bombing and arcade-themed tasks, such as opening up the path, unlocking characters, defeating opponents, and so on.

This game is hilarious and inspired by the classic arcade gaming genre, so you need to be flexible, quick on your feet, and be the best at improvising under the pressure of time. Once you start the game, there will be more than 100 players joining in at the same time. Your job is to start finding the way out of your corner, setting the bombs near the other players, and exploding anything that is blocking your path!

Gain more skins and updates, as well as unlock a new character to add to your collection of powerful ones. Not only is your final record one important element for this game but your ability to defeat the most enemies within the limited time frame will be equally important. Let's see which rank you can climb up and see if you can claim the highest scores in history!

When you purchased more updates, your bomb explosion range will be able to reach further blocks for sure, so try your best to gather more boosters to maximize your explosion range. Go ahead to explore the new games like Solitaire Story TriPeaks 3 from our list at https://gogy.games/ with equally thrilling gameplay during the weekend!