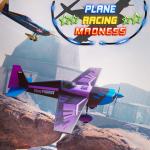 If flying a new and extremely modified plane has always been your dream, come to this new game called Plane Racing Madness from Gogy 3D game and explore the biggest race of the week! Not only will you get to fly with your unique customized plane but it's also a thrill to explore this new killing machine in a 3D environment. Fight for your life and race for the 1st position in this survival and racing plane game!

As it's one of the customized world wars in the virtual space, you can enjoy a challenging setup for plane racing where there are a bunch of thrilling levels, boosters, power-ups, and the best physics environments. Learn how to fly the plane and beat the other opponents in this best war simulator out there! First, learn how to control the race system and how to gain the most boosters in this cool-down system. There are three modes that you can go for at the beginning of the game, which are Championship, Arcade, and Time Trial.

Each one of these modes comes with a different goal and unique rules, which might require the players to be a bit more adaptive to get used to the new trend. Some elements that you might want to take notes and pay attention to during the race are Speed, Damage resistance, Booster power, Booster duration, and Booster cooldown. If possible, use the gained scores to purchase more updates from the store for the mentioned elements as soon as possible to keep your plane condition best.

Whether you are choosing an alternative route or a shortcut, pay attention to the other players' positions on the map to avoid being hit by their missiles. Keep an eye on the local Leaderboard as well to see your rank. Are you ready to ace this plane race at  https://gogy.games/? Go for more 3D games like Drift Car Extreme Simulator if you have some time later!

Use arrow keys to fly and turn,

use the X key to capture boosters,

C to break the items, and space to add power-ups.