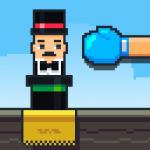 Power is just one of the elements needed to win the highest record in Rabbit Punch, however, we recommend that you learn how to estimate the timing and throw the punches at the right moment to excel in this Gogy free game. This is one of the most satisfying games as the players can hit the rabbit to release stress and anger.

First, choose from the two available options of 1 player or 2 players, which means that you can call up your friend to join the battle. After you have entered the match, pay attention to the black hat in the middle of the screen. Like a magician's trick, there will be something popping up from there. You can only hit the white rabbit to earn scores, however, avoid hitting the man in the suit.

The scores are shown at the bottom corner of the screens on each side for your reference. The more consecutive hits that you perform, the more combos you gain to top up your scoreboard! In this game at http://gogy.games/, nothing is refraining you from unleashing all the power in the punches that are thrown freely!

Just keep hitting but make sure that you don't accidentally hit the wrong targets or else the scores will be deducted quite a lot. Explore the world of fun games in different genres such as One Pipe and Beer Slide with your friends!

Click at the right moment to hit the rabbit.