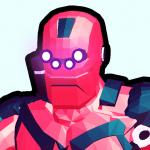 Hero 3 Flying Robot is your chance to make the superhero dream come true! You will be in charge of this flying super robot suit which is slightly similar to an Iron Man suit with shooting force, aviation system, hand-controlling technique, and the first-person point of view. You will carry out the task of scouting around the city.

There are enemies everywhere, ranging from the other countries' armies, the assassins, the evil forces, but with a good grip of the suit's capability, you will win this Gogy online game! The robot can fly according to your maneuver and shoot an energy beam from the palm of its hand. Learn how to use the parameter and the telescope so that you can aim the homing missiles towards the tiny targets.

They are far from where you fly your robot so only the best aiming technique can help you take down several enemies at once. Once the laser beam is activated from your chest, start destroying the enemies who are hiding among crowds. The robot in this game has many other unique abilities that will be unlocked along with the realistic flight physics for elaborated fight movement.

You can also look forward to this 3D realistic and beautiful animation that will keep you hooked for hours. Keep in mind that you need to control the firing missiles carefully so as to choose the best timing for activation of them. Dodge the incoming bullets at all cost to stay on the air! Other games like Tank Alliance will take you to new adventures if you are a good fighter, so hit them up now in the category at  gogy unblocked !

Fly and look around using WASD, Space, or Ctrl key to move up and down, activate the shooting beam using the mouse button, F key to activate firing missiles.