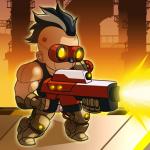 Nova Defender shows you the variety of fighting games from the list of this genre from Gogy land! Fighting is all about using a limited amount of resources such as strength, power, boosters, speed, and weapons to defeat whichever comes your way. Will you be able to get the chance to become a top player with such a limit in this fighting game?

As you are the only survivor left to protect your base, use any kind of weapon that you can get to knock down the aliens. They will approach from the bottom of the map, while you are at the top of the base to get a good aim and shoot better. The more precise your shoot, the faster the herd will clear.

Amidst of this fierce war, the speed and aiming technique are two elements to keep you alive. The beginner might feel a bit overwhelmed since there are so many aliens attacking at the same time, but after a few turns, you will get the hang of it. Of course, the aliens will not stop until there is no one left, so be strong, muster up the bravery to take a shot!

At http://gogy.games/ you can find a lot of new games with an awesome fighting theme like this if you are a fan of futuristic battlefields. Continue the streak of winning with more games like King Rugni Tower Conquest and Swamp Attack Online without any cost!

Aim, move the gun and take a shot using the mouse cursor.