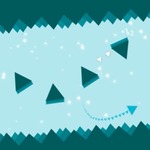 3anglez is a 2D arcade game which brings you to a strange world of the triangles. This mesmerizing platform game of gogy games for kids not only makes you feel attractive but also help you ameliorate your agility. You will play in a space covered by 2 blue walls full of triangles.

Your mission is to control a single black triangle and move it through the never-ending tunnel without crashing into the obstacles. When you go ahead, many large triangle objects are shooted from the top and the bottom to harm you, so you must avoid touching them. If you let them hurtle you, you will lose your life and have to restart the game in gogy games for school.

Furthermore, a group of small red triangles will pursue you to attack you by touching you. Keep moving toward and wind around the large blue objects and make the group crash into them and these red obstacles will disappear. You can gain one point for each disappearing object.

Go further to gain more points and your score will be added after each time playing. You can purchase power-ups when you progress by a large number of scores. In addition to this, you can utilize this accumulated points to unlock more character's model and colors. Sometimes, the power-ups appear at random intervals during the game. Watch out to catch them.

Pay the highest attention to avoid the blue barriers and trick the red triangles to make them disappear. You don’t have the second chance if you die. Respect your life!

This game is support in the Android devices and web browsers, that means you can relax anytime you are free. Show of your emotion if you think this game is great by voting it and leaving your comments. Share the game with your friends to compete them and see who can go further. Play more games with http://gogy.games/ such as Angrybirds Vs Zombies and Angrybirds Vs Zombies.

Use left click to start the game and control the triangle's movement by moving your mouse.