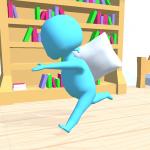 The minute that you are bored of staying at home for too long, don't hesitate to grab the pillow and enjoy the free game called PillowBattle.io from Gogy land in the middle of this social distancing period. The game is hilarious, fun, and filled with extremely good players from all around the world. Not only will your accuracy in hitting be tested but the game also requires you to move flexibly and get a good grasp of the situation.

The game is an io game with 3D graphics and an elaborate map filled with many obstacles, different objects for interacting, and plenty of challenges. Once you enter the game, you need to move right away. The map is large but there are also many players attending one map at the same time. Make sure that none of them can catch you. Because you don't have any pillow to use as your weapon from the beginning of the game, it's best to move and dodge the attacks as soon as possible to keep your character safe.

In this multiplayer map, there will be only one or two pillows showing up randomly. It's your job to quickly move across the room to find and capture that and use it to your advantage. The pillow will disappear after a short period if no players manage to grab it. In case your opponent manages to capture the weapon, steer clear from that player to secure your safety. Becoming the last player standing in this game from http://gogy.games/ is not easy at all, but it will be an incredibly fun journey with lots of hilarious moments and soft pillows!

Keep in mind that any player who got hit with the pillow shall be eliminated immediately. Enjoy other io games like Schedios.io and Sumo Push Push to learn the movements!

Move and attack using the mouse cursor and left mouse.