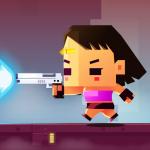 Blast the rifles and shoot across layers and layers of the evil army to conquer victory in the new gaming selection called Cyborg Slayer from Gogy fighting games! Not only is this a newly set-up platform with the most powerful and aggressive evil cyborgs as the bad guys but it's also a good way to destress after a long day at work. You will be doing two tasks at the same time, which are to shoot precisely at any cyborgs showing up within range and to collect the coins dropping from your successful kill.

More and more unique characters will be unlocked later for your usage after you have cleared out a certain number of levels, but pick carefully before switching because each of them has its specialties, strengths and weaknesses. Depending on the challenges and the requirements of the stage, you can select one that fits perfectly for the tasks. With the gameplay of a classic run-and-shoot game, you will have to keep the character running while aiming at the evil machine.

Don't forget that the goal of auto-running and changing among 3 lanes is not easy at all, so stay focus and avoid crashing into any obstacles. Unlimited time is one highlighted feature of this game from http://gogy.games/ so that kids can freely play during one stage. However, keep an eye on the remaining HP stats for your main character because if this number runs out, the game is over.

A larger crowd of cyborgs, evil machines will cluster more as you progress to the higher levels. The power-ups will give you tons of advantages during your tough missions or give you the ability to shoot at many at the same time. Let's start shooting in this game and visit more battlefields later with games like Pixelkenstein 80s Time!

Move and shoot with WASD and spacebar.