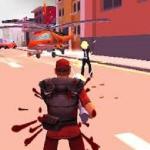 The mafias are causing the mayhem in your city. Since their comeback, there has been a lot of crime going on again. Therefore, in this Gogy action game, you are called upon to save the city from the thugs and bring back the peaceful environment for the citizens! Are you ready to dive into a bunch of missions against waves of criminals?

The main task is to shoot them down, but of course, it's not going to be that easy. The criminals are smart and they can find you if you fail to move and hide. You can steal any vehicle you wish, such as auto, car, tank, helicopter to support the mission. The game comes with a unique open-world environment and it's also a third-person shooter game. It's not easy to clean the city from the criminals since there will be lots of mafias scattering around the large world.

The better the weapon, the higher the chances that you can headshot the enemies. Remember that at http://gogy.games/, there is no rules or orders anymore. In this second version, you can even slow down the time using the slow time mode to make the game a little easier. But all in all, it depends on your fighting ability and shooting skills to be the winner. Have fun shooting at some other objects with games such as Mad Boss and Critical Combat Battle Royale.

Use the arrows or WASD to walk, mouse to aim and shoot, X to throw the grenade, J to jump, Q to switch weapons, E to enter the vehicle.