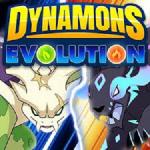 Evolve to reach the top of the food chain in Dynamons Evolution, a new game for players of all ages in Gogy land! It has an incredible and elaborated storyline with lots of cool characters for you to unlock. The collection of monsters and Dynamon in this game is huge, so let's see how many Dynamon can you conquer! If you haven't tried it before, don't worry as our guide Jovani will help each player through the most basic steps in this game.

You need to move the orbs in a grid to match the same orbs together. By doing this, you will be able to attack the Dynamon which is standing in front of you at that time. The best part is that unlike the other games, you can move the orb freely around the grid without any barrier. The best players should be able to match the orbs both horizontally and vertically to gain extra scores as well.

Keep track of the energy bar and the icons to know which orbs you need to acquire. Also, if you manage to make a double or triple combo line, you will be able to defeat the other Dynamon much faster! At http://gogy.games/, you can have fun and take new challenges with an incredible list of cute monsters! Become the best trainer with some other games like Candy Forest and Laps Fuse.

Use the left mouse to move the orbs around the grid and interact with the characters.