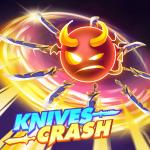 Knives Crash IO is a suitable choice if you are looking for an io game to share with multiple players from all around the world with real-time clock and progress. Enjoy this madness of battle among the greatest fighters who are fighting for the top scores of the game. You will need to control, move, and maneuver your character with given weapons and features to survive on this map.

Strike at the other opponents with greater force to defeat them as soon as possible. You will also need to navigate your way across the place to crush the opponents and collect knives as they pop up on the map. You have higher chances of running away from bigger opponents and striking at them more efficiently if you can gather the scattered weapons. The way to defeat other players is by slicing their knives and crushing them while collecting their energy to grow your own strength later on.

This game from Gogy IO land brings the best intuitive and clutter-free interface with the top-notch design for your exciting battles! The realistic design of the knife hero will come with interactive controls as well, while you can score more to unlock new items. There is a wide range of knives that you can equip your character in this free game, as well as chances to devour smaller opponents to grab theirs.

Make sure to take advantage of your knives before moving on to the newly unlocked weapons. Not only will you have the chance to unlock new rewards but there is a setting for auto-matching with global players as well. Let's gather all knives that you can to move forward and conquer higher levels later! Test your ability with more io games like SuperHero.io., all available without any cost at https://gogy.games/!