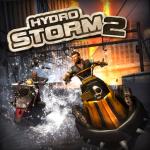 Participate in the most spectacular water race ever in this Gogy new game called Hydro Storm 2, the second version of this water race series. Finishing third or better in each race will get your ranking up and above along with some newly unlocked items for better upgrades. Keep an eye out for the pick-ups along your path as they will be crucial for your health and endurance in the game.

For example, if you manage to collect the first-aid boxes, your health will be restored. The yellow boxes, on the other hand, will target your opponents and take them out as fast as possible! You will be overwhelmed with the list of weapons available in this game at first, since they range from the hydro force, homing torpedo, shields, rockets, to the barrels and grenades. Use each one wisely and timely to avoid counterattack from your enemies.

If you can use them well, the chances of you being on top of such treacherous waves of the race will be much higher. There is no law here and the rules are non-existent, so only the best players can win. Moreover, the post-apocalypse theme with futuristic features will be quite a new experience for the fans of racing games.

Let's see how good your dodging and attacking abilities are while being under the biggest pressure in this game from https://gogy.games/? Other racing games with the latest model of cars and vehicles will also be good options for the play time. Hit them up right now with the newly updated ones such as FNF Music 3D or Orbit!

Instructions: Use WASD or arrow keys to drive and steer the vehicles, Z and LMB keys to change between the primary weapons, X and RMB keys to choose the secondary weapons.