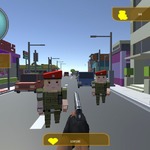 Welcome to the Robbers World ''Block Pixel Cops'' on Gogy. In this world, all cops are infected by a virus. Your task is to shoot them all and try to be alive each level. Watch out for these pixel Cops who are well-trained, they can chase you at any time. Run away from them or hidden in somewhere. However, it is not the best way to survive. You have to shoot and fight, or you will be killed.

MInecraft games are the best and if you have ever played minecraft than you know because you only need your creativity and some skills, and , of course a lot of exercise and we can promise you kids that you are going to be able to create everything, a new world. Well in this new Minecraft game the world is already created, you are some kind of agent and your task is to be good at using the gun because in each level of this gogygame some kind of characters are going to come after you and try to kill you. But don't worry ebcause this is a pixel Minecraft game so nobody is in danger in reality, it is a super fun boys game because you have to shoot all the bad guys and it won't be an easy task but you can do it.

Block Pixel Cops is a fantastic, Minecraft inspired shooting game. Your city has been attacked by an invisible virus that turned all cops into blood thirsty zombies. Shoot them on your way out of the city and try to survive for as long as you can. Have fun with http://gogy.games/!

You may also like: Hobo Prison Brawl and Feed Us Lost Island

Arrows to move, Click to shoot. Press ESC to show the mouse pointer.