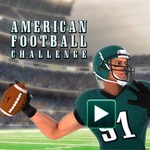 American Football Challenge is a cool sports game to take your football skills to the next level. The game is playable online in gogy sports games for free. You will play in a large pitch with the witness of many people. You play as a ball catcher whose mission is to catch the ball to gain points.

Your task in this game is to control the receiver’s gloves to catch as many balls as possible and don’t let the ball fall down. The quarterback standing in the middle of the yard and he throws the ball toward you and you have to pay the highest attention to score in gogy online games for kids. In each match, he will throw a certain of times, for example, the number of throwing balls in level one and two is 5 and this number in level 3 is 6. You have to catch at least 3 of them in order to be able to unlock the next level.

If you catch less than 3 balls, you have to replay this level again. You receive 10 points for each ball. At many first levels, it’s not very difficult for you to win. Thus, start warming up with them and get ready for some serious stuff. It gets more challenging every time when you are at the higher levels. Attempt to conquer all 10 levels of this game.

We are so thankful to receive your feedback. Don’t forget to introduce the game to your friends to practice together. Explore more interesting games like Sworm .Io and Skate Hooligans at http://gogy.games/.

Use your mouse to control the gloves and catch the ball.