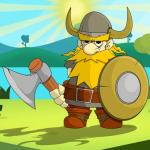 ArchHero: Viking story is not just any ordinary fighting game that you found scattered online. This is a new choice for kids at Gogy games online who love a bit of action-based features combined with the adventure mode! Conquer all the battles with your smooth movements and defeat the enemies to take over the island. There are a lot of islands left for you to explore and claim ownership of, but the difficulty level increases significantly as you move through the game.

First, learn how to control the character and use the existed blocks as your helpful walls in the match. To win, you have to dodge the attacks while killing all the enemies. Each player comes with a specific bar of energy on the top of his or her head, so you can keep track of the remaining energy using that. Keep in mind that there will be more than 4 barbarians on the map at the same time.

As they attack at the same time, make sure that you can dodge all the bullets, spiky objects that they throw at you at once. In this hyper-casual game from https://gogy.games/, the player gets a reward of updating the weapons using one of the three available boosters showing on the screen when they win a level. This is the way for you to become stronger and stronger!

After clearing out an enemy, you can choose new updated skills from increasing attack damage, double attacking, to poison bullets. The range of update choices changes depending on your basic needs and statistics at the moment of updating but choose wisely based on your tactics. Keep going on the boat to explore more islands and land in this game online! Don't forget that other games like Hero Telekinesis also come with good gameplay and challenging quests!

Use the mouse to move and shoot.