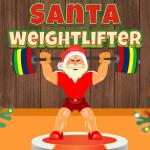 Santa Weightlifter will spice up your holiday experience a little bit! It's different from any other Christmas or winter games that you played before. This time, to have health and become strong enough to carry all the presents for the holiday, Santa will train to become a weightlifter that can carry a lot of heavy gifts. As it's a casual game with a hint of arcade features, the creators from the Gogy kid game hope to create new inspiration for the players who love a simple yet addictive game.

The goal is to help Santa to stand on his feet for as long as possible while maintaining the two packages of presents on two side. Only by dividing the weight equally on two sides will you be able to deliver the best result. There will be a red rolling bar on the top of Santa's head along with a dotted line in the middle which indicates the separation of the weight. If you manage to stop the weight at the position that such a dotted line is placed in the middle, the task of dividing the presents is completed.

However, a slight miscalculation will result in Santat tilting toward that direction for a bit. In that case, put more weight on the opposite side to retain the balance for the next stage. Click on the right timing to keep the balance between two packages of presents and help Santa standstill. The speed of the bar will increase significantly throughout the levels so your speed has to increase accordingly to stop the bar on time.

Don't be afraid of failure and keep on going forward by practicing more and more in this free game at http://gogy.games/! Dive into plenty of new games for boys and girls such as Roof Rails later.

Click or tap on the screen to stop the bar.