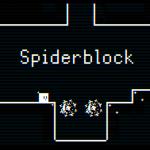 Spiderblock will be a surprising new game in which the players need to think of a block as the main character of https://gogy.games/! This special block has the ability to move in two directions and also another unique skill of throwing a spider web! This spider web can help the block grab the next benchmark or point to pull him over the gap as well as the obstacles.

Your job in this arcade game is to continuously move along the maze to find the way out without dying midway. Steer clear of the obstacles and jump to dodge them using the spider web as a method. Once you shoot the spider web and it sticks on the next block, your main character can pass from wall to wall using that momentum! Pulling and jumping has never been that fun in this 10-level adventure with the cutest black-and-white classic style!

Some prominent obstacles that you will find in this arcade game will be the sharp-bladed wheels arranging in groups, high blocks, and deadly holes. Keep your eyes open and think of the most efficient and creative way for overcoming the next block on the journey to escape this maze filled with dangers!

How many times do you need to jump to make it to the other side? If you are a newbie, we recommend that you try out the game a few times, as this helps you significantly in getting used to the rules and basic movement of it. Gain a bunch of tips to showcase in more cool games like Piggy On The Run from the collection at gogy games unblocked later!

How to play: Move to the left and right using arrow keys, jump using the Z key, X key for shooting the spider web.