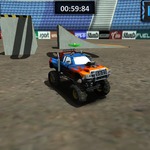 Pick one of your favorite off-road monster trucks, enter the stunt arena, and start the engines! Prepare to handle the massive vehicle you are given like a professional driver, and perform breathtaking stunts along the way.

By the way, check out more related game such as Bus & Subway Runner and Audi Tt Rs