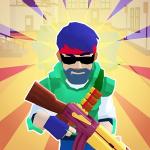 Machine Gun Squad brings adrenaline and thrilling sensation to another level with its shooting gameplay and exciting features. All players joining this Gogy free game will play the role of a brave soldier who is heading for the most dangerous mission. Your purpose is to kill the head of terrorists who are hiding among the villages, the towers, and jungles. It will be a cruel and intense manhunt between your team and the terrorists', so prepare the gear, weapons and be flexible to survive.

First, take a look at the map to know the layout and terrain of your battleground. Once you get the location of the terrorists, start moving around and tackle any threats that show up. Be quick and be in control to make sure that no opponents can escape. It's also a team game in which you are required to cooperate with other players to get the best results. Sometimes, you can get the airdrop that includes boosters and bonuses while being in the middle of the battle. Don't let those get in the hands of the enemies to make sure that your chance of winning is higher.

Powerful weapons will either be hidden among the boxes and bushes or in the airdrop boxes. Keep an eye out and move constantly to gather more ammo as well as firepowers. This game from http://gogy.games/ brings the best first-player gameplay with 3D simulation to create a pretty realistic platform. Advanced players will thrive in this game, while beginners can enjoy this new type of game and practice more!

Plenty of updated gaming options like Rum & Gun or Galaxy Attack Virus Shooter at our website will take your gaming experience up a notch, therefore, don't forget to check them out sometimes.

Drag the mouse and click to aim and shoot, move with W, A, S, D or arrow keys.