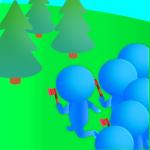 There are plenty of chances to keep your power and title in this new online game of Crowd Lumberjack from Gogy 2022 without losing a single soldier on your team. As it's an assemble game in which you will learn how to generate resources to build a city, learn how to upgrade the infrastructure and come up with a plan for city constructions from scratch. First, start roaming the map and learn how you can control the movement of your ragdoll.

Once you have understood the basic rules of the game, it's time to upgrade your power through multiple ways, ranging from expanding the territories to searching for new material and such. Keep in mind that the most important task of this game is to utilize your basic construction skills to take advantage of the resources and construct the houses on the island.

Start with simple tasks like cutting down tree barks, collecting wood pieces, to setting up new infrastructure. Learn how to put your trusty tools and gear such as the ax to work while trying to collect more lumberjacks to your team. The more crowded your city is, the higher your rank will be. You can optimize the speed of work and increase the pace of moving forward using the newly added boosters on the map.

Plenty of landscapes in different locations are available on the island to keep your gaming experience more thrilling and challenging! Let's see if you can overcome all the obstacles, build the biggest city on the island and build an empire of your own! Follow the in-game tutorial to understand how to use control keys. Join more games like Raid Heroes: Total War later for a new experiment with online games at https://gogy.games/!

Move the character with WASD, interact and choose using the left button.