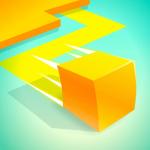 Experiencing the feeling of Conquest! Killing every Intruder! Paper.io Online is your best choice. The game can be mastered immediately, but you need to notice that your tail is the fatal weakness. However, if you go ahead and touch anyone's tail, that's the end for him. It's time to show your strategy and game skills.

Your goal is pretty simple to get ? Conquer the largest territory.

It seems simple at first since the game is very easy to handle. But beware it might be a bit harder to master.

Whether you’re bold or careful, outwit your opponents by finding the best strategy to conquer the largest space. And stay cautious, you have a weak point : your tail. If ever it is touched by an opponent, you are dead.

Also make sure to guard your territory because in Paper.io nothing is sure as long as you do not own the whole territory. Stealing is legal and your opponents won’t hesitate to do so.

After the success of Quiz Run and Bool, Voodoo offers a new and fun experience inspired by io type games (popularised by agar.io). Find the simplicity and strategy on an io game in within a unique graphic universe.

I started playing this game a few months ago, back when it still had the coins to buy skins and a level up system and honestly that was so much more fun. Cause the longer I stayed alive the more coins I got. The more coins you got the cooler skins you could buy. Then they updated it to "play daily and get a skin" and I don't even get a skin for playing everyday now.

I think it should go back to how it used to be. Much more fun and more addicting.

Also, there's a bunch of you saying it's so busy mid day and at night there's still quite a few people on. That's because it's not actually an online game. I looked it up a few weeks ago and that's another reason I'm not as addicted to this game as I was. When you know you're playing against AIs it sort of changes how you wanna play.