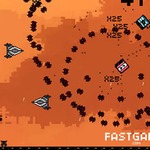 10 Bullets is the funny shooting game which you can play on gogy games online for free. The game doesn’t require you to have the good shooting skills, just grab the chance to shoot at the right time to kill plenty of opponents. It’s raining today. You are standing on the ground. Your duty is to control a shooting machine.

You are given 10 bullets and use them to kill your enemies. You can not move but your enemies are moving around in the sky. They appear wave by wave but they don’t attack you, so you won’t get hurt and you just need to slay the foes and don’t need to defend yourself.

The game of gogy games for school doesn’t limit your playing time, so you don’t need to hurry. Just wait for the suitable moment and shoot the bullets to kill as many opponents as you can. When you shoot one bullet at a spaceship, it splits into many other bullets to attack other ships around them. You should wait until there are many ships flying in the sky and trigger massive chain reactions that will blow the screen with massive explosions! For each opponent you defeat, you gain one point.

After you finish shooting 10 bullets, you complete your mission and your score is equivalent to the enemies you kill. You can see your highest score after the game is over. Try your best to gain the highest score and set a record!

We are so thankful to receive your assessment and feedback. If you like this game, share it with your friends to entertain in the free time. Explore more interesting games like Enter the Black Hole and Tank Defender at http://gogy.games/.