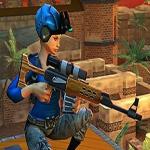 A female sniper will lead the elite team full of advanced snipers in this Gogy action game in order to gain back the control of her land. Will you join as one of the significant shooters in the team? Hop into Sniper Clash 3D to enjoy this realistic setting for shooters and elaborated gameplay! You will be in charge of organizing your team from the real-time players so as to prepare for a fight against the approaching enemies.

Only the best team can manage to survive, therefore, before joining the real match, prepare the weapons for your teammates carefully. Since it's a shooting game, each of the players will have his or her own weapons, ranging from rifles, machine guns to explosives and others.

One notice that beginners should keep in mind while tackling the enemies is to reload the bullets after every turn. If you don't reload, the gun will be stuck and can't work. The final mission in this game at http://gogy.games/ is to get an enemy flag with your team. More than just aiming precisely and creating the best shots, it's also crucial to defend other characters to show the teamwork spirit.

Pay extra attention to your team, especially the one who has the flag. You can take advantage of the guideline to aim better during the middle of the intense war. Show off the girl power in more games like Zombie Stalker and Legend Street Fighter later!

Use the keyboard to move and mouse to shoot.