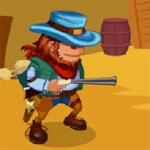 Which player shall be able to claim the title of the best shooter in One Hand Cowboy? This Gogy game inspired by the shooters from the West guarantees the thrills only. All of the shooters will take part in the competition with only one hand, hence the name. In order to defeat the others, complete 12 levels with the best scores possible to unlock new events. When the difficulty level increases, it's time to put your reflex and adaptability to test. Beware of the close targets and take the number of bullets into account.

Since you only have 3 shots per level, aim properly so as not to waste them, which means that you should use the least bullets possible. Another hardship to make the game at http://gogy.games/ more interesting is the time limit. Each turn lasts for only 30 seconds with the moving targets. Can you endure the pressure of time and enemies? Since this game brings the theme of shooting battles from the West, the graphics are colorful and bright. The tip to shoot perfectly is to aim with the adjusted angle to create a straight path for the bullets.

It's a new shooting game that is easy enough for kids. However, the more you play, the more challenges you can face. We also provide tons of shooting game choices here such as Kung Fu Street and Super Crime Steel War Hero if you would like to explore further.

Use the left mouse to shoot at the targets.