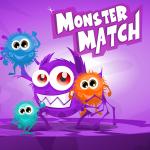 The monsters are gathering around in Monster Match and it's up to you to clear this festival! The goal of this game from our Gogy puzzle collection is to match the right set of tiles. Which type of set will be considered as the right ones? Let us guide you through the details of this rule. You need to click on the chunk of tiles that are close by in the order of horizontal or vertical. As they form the adjacent lines with three or more similar pieces, they will be automatically collected and calculated as one success set. It's not that hard to search for them since they will pop up right in front of your eyes.

Keep finding the possible tiles close by that can help you achieve this objective without having to move too much. It's very satisfying to get to blow up the combos of tiles and make them explode with just one touch! Furthermore, the players who can think of the best way to manipulate the movement and fall of the pieces so that a line of four or even five tiles is formed shall be the best.

The total grid will keep piling up one line at a time until when the whole thing reaches the border at the top. Don't let the tiles pile up to the top of the game screen because it's forbidden in this game from http://gogy.games/. It's such a colorful game with tons of cuties and adorable monsters stacking up the frame. You will also get to test your control ability when being put under the pressure of time.

More puzzle games with new challenges and gaming rules are available for your selection such as Rabbit Punch and Axe Master. Would you be the best at clearing out the monsters?