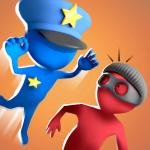 Catch The Thief 3D is a typical running game where players will get to emerge in a 3D realistic platform and run like crazy! There are lots of thieves who are trying to take away the valuable furniture, lamps, money, and clothes from the house. You, as a marshal, will dash into the scene and catch them red-handed in the middle of the act! The rule of this Gogy free game is very simple.

You just have to control the movement of the policeman and make him run toward the direction of the thieves. However, that's not the difficult part. The challenge lies in the number of thieves and how fast they all move. It's very important that you develop the ultimate sense of direction and choose the right timing to corner the thieves successfully. If you can't capture the thieves before the time runs out, you can't move past that level.

The game allows advanced players to pick their characters using the "Select Character" option. A different character such as the marshal, the policeman, the firefighter will have different pace and skills to conquer the given stages. Don't panic when seeing too many thieves roaming around the scene. Stay focus and target one or two of them at a time, and you will slowly get the hang of this game!

From the collection of http://gogy.games/, we bring the joy of easy yet incredibly fun games like Axe Master and Monster Match to kids and adults all over the world! In the beginning, it might be a little hard to direct the character due to the simulation features, but after a few stages, you will be able to get used to the main theme and become an excellent officer! The challenges will become better as you progress to harder levels, so check them out!

Use the mouse and left button to control the character