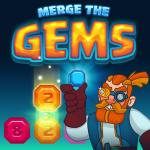 The merging tasks in Merge The Gems is no easy feat as you are required to spot similar numbers, free them in case they are trapped then combine them. The rule of this game resembles that of the famous 2048 game which has been all the rage back then. You will try to reach the highest number possible using the method of merging and combining the pairs.

There will be tons of stages, each with its limited number of moves and requirements for merging. As shown on the screen, each gem comes with an individual number that will distinguish it from the other on the board. Should you spot two of the same value, feel free to grab one and move toward the other. Once these two similar-valued gems meet, they will automatically merge and create a new gem of the new value.

The biggest value gem will bear the number of 30, but in order to see it, you have a lot of manual work to do. For some tiles, they are stacked upon one another, which makes it impossible to move the gem below. In such cases, you need to remove the one on the top before trying to find the match for the below piece.

In this game from http://gogy.games/, there's a Leaderboard to measure how fast you can solve the problem and which rank you are in this online merging game. The faster you can merge to reach 30 and the more combos you manage to gather, the higher your chance of climbing up the ranking ladder is. Don't forget that mathematics plays an important role in this game as well, so calculate as fast as possible to win!

Once all the gems fill up and reach the top of the board, your game will be over. Keep exploring more puzzles and jigsaws with some games like Shopping Mall Tycoon for free!